Most young adults today are much to young to remember to the Cold War, yet since they are perhaps the most vocal crowd in media, it’d be easy to for them forget that it wasn’t that long ago the Cold War came to an end. Less than twenty-five years ago, actually. The Cold War was a magical time of spies, espionage, no actual war, and constant threat of nuclear annihilation.

As a child growing up in the eighties, the Soviets were always our biggest fear. The world maps in our classrooms didn’t help matters any. Every country was color coded so that you could distinctly discern borders. Looking at a map you would see lots of small colors and then there would be this giant red mass labeled U.S.S.R. That thing was terrifying and the only thing keeping us safe from the Ruskies was ocean. And then we learned about the Bering Strait and realized that they could attack us from Canada if they so desired. 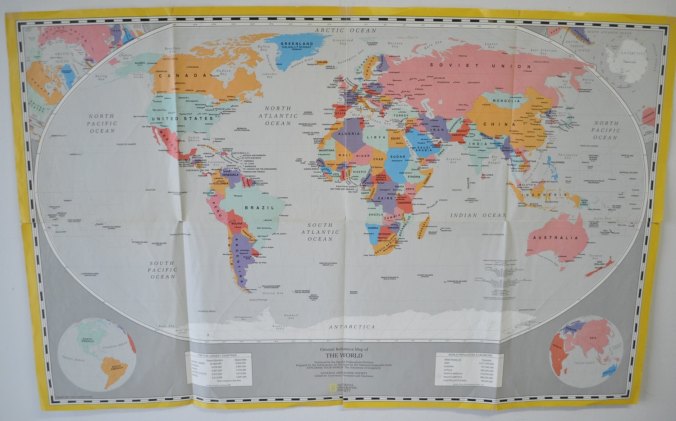 This is what a map made entirely out of terror looks like.

The movie Red Dawn didn’t help things any either. I hadn’t even seen the movie at that point and yet there were many times I worried that I’d look out the window and see Russian paratroopers falling out of the sky. Remember, this was a plausible scenario back then. We already knew that there were Commie spies among us; we just didn’t know when they’d strike. Thankfully, we could take solace knowing that Patrick Swayze and Sylvester Stallone would be there to save us should things ever go down. That is if they didn’t drop the bomb on us first.

This being the Cold War, the possibility of nuclear winter was always a reality. The federal government made sure we were all prepared in case such an event happened. As elementary school students, we learned the importance of Duck and Cover. What’s that, you may ask. Duck and Cover is what you were to do in case of a nuclear attack. While you may all be familiar with fire drills, we had nuclear bomb drills. There was even an alarm for it. When the alarm would go off, we would stop what we were doing and hide underneath our desks. The drills were common enough that I can remember looking nervously out the window of my classroom at the water tower and expecting to see a mushroom cloud in the distance. The real terror came if we had a fire drill and had to run outside to a designated area in an orderly fashion. What if the Ruskies had decided to drop a bomb then? There were no desks to protect us. Why the school never had like five giant sized desks outside I’ll never know. Underfunding I suppose.

No joke, this would save your life from a nuclear explosion. Don’t you dare question it!

Speaking of underfunding, I never realized just how underfunded the school system was until the Cold War ended. At the beginning of every school year up until freshman year of high school I think it was, out teachers would point to the big red spot on the map and say “By the way, that doesn’t exist anymore.” For the record, I started high school in 1996. 1996 and we still had maps that depicted the Soviet Union. When they were finally replaced, it seemed so surreal. No longer was there a big red menace casting it’s shadow on the world. Instead, there was just Russia and the world suddenly seemed a bit more open.

I’ve heard stories that Vladimir Putin is trying to bring the former Soviet countries back into Russia’s fold. Perhaps they have a lot of old maps that they still haven’t replaced yet. If this happens, I hope they at least have the good sense to call it the Soviet Reunion. I’d hate to see them blow an opportunity like that.

“Hey, let’s get the gang back together and start Cold War 2: Cold Harder.”